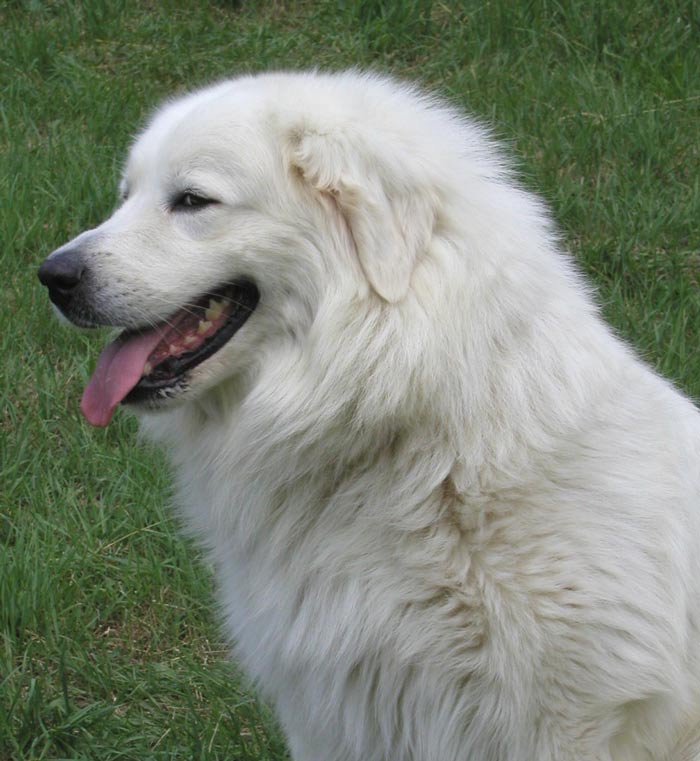 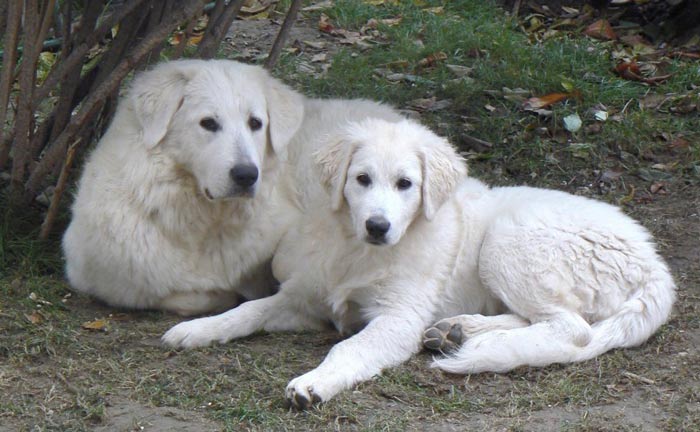 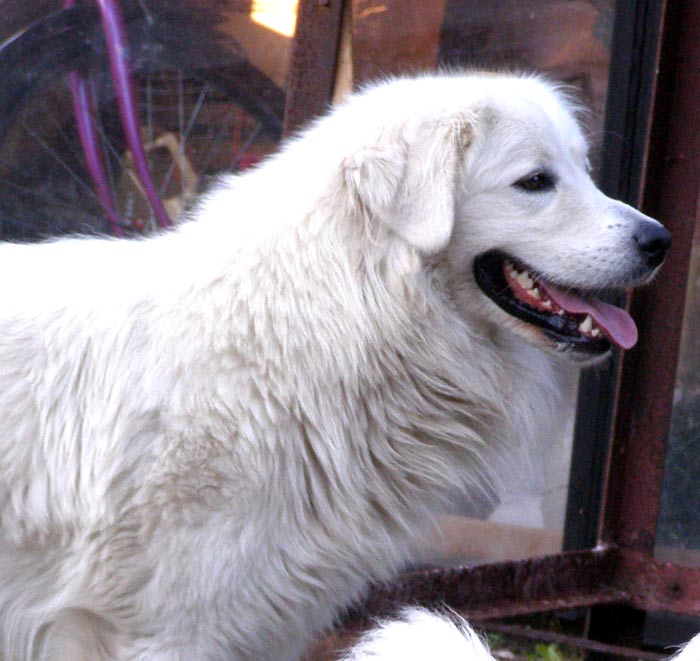 Utilization: This derives from his age old use as a shepherd and mountain dog in bare high mountain regions and as a guard dog for farms and borders.

BRIEF HISTORICAL SUMMARY: The breed group of white mountain dogs is derived from Arctic wolves, whose remains from pre-ice age have been preserved in the mountainous regions of Europe to the edge of the glaciers. These are the north slopes of the Caucasus, the Balkans, specially the Rodope mountains, the Carpathians, specially the Tatra, the northern slopes of the Abruzzi and Alps and finally the Pyrenees. In these colder and damper areas, the alleged type of mountain dog is also accompanied by remains of flora and fauna whose nearest location were still found in Scandinavia by the Swedish explorer Wahlenberg. A similar connection with Nordic domestic animals we can, for example, find in the Tatra and Carpathian region with the Huzul horse, whose nearest relation is the Gudbrandstal horse. So it is with the Tatra Chuvach, whose Nordic analogy is the Pomeranian Shepherd dog (Pommernscher Hütehund) and others.

Slovak alpine farming has a very ancient tradition. The Tatra Chuvach, together with the mountain sheep, the Huzul horse and the typical mountain inhabitants, form the basis for an economy which assumes the utilization of the pastures through animal husbandry.
The Slovak mountain people were largely free people, not suppressed by medieval forced labour, which protected the frontiers and paid its dues merely in the form of “sheep’s cheese”. Their organization was called “Wallachischer Bund (Union)” (Valasski Opasek), whose centre (until the repeal of forced labour) was in Kaschau. The members of this, basically, herding and military organization, carried out their service on the mountain meadows, always together with their typical dogs, the watch dogs of the Tatra and they were always depicted with them.

As a good guard, watch dog and companion as well as guide for the shepherds, the Tatra Chuvach has also proved his worth in the guarding of cattle, driving poultry and other domestic animals to pasture, as well as guarding different objects. Holiday makers visiting the mountain farmers to buy cheese and other products found pleasure in the thickly coated puppies and so transferred the breed to the low-lands, where they were not seldom regarded as a luxury breed because of their unusual appearance.
On the Polish side of the Tatra, where a similar breed, the Goral Dogs (Mountain Dogs), are kept, specially powerful animals are called “Liptauer” by the people which points to the Slovak origin. So the breeding region of the Tatra Chuvach has a topographic boundary.
The Stud Book of the Tatra Chuvach in Czechoslovakia was founded more than thirty years ago by Professor Anton Hruza of the Brno Veterinary College. The basic material stemmed from the area of the places Liptovska Luzna, Kokava, Vychodna v. Tatrach and the neighbourhood of Rachovo in the Carpathians. The first breeding establishment had the name “Ze zlaté studny” (of the Golden Fountain) and was founded in Svitavy and Brno. The Carpathian kennel had the prefix “Z Hoverla” (Of Hoverla). Since then the club for Tatra Chuvach breeders, with its headquarters in Bratislava, has kept exact records and held exhibitions, assessments, competitions and shows in all regions of the republic. Further old blood lines stem from the places Liptovské Hole, Velky Choc, Zakopané, Martin, Jedlova and Jeseniky.

The widest spread lines are those of Topas, Uran, Simba, Hrdos, Ibro, Cuvo, Bundas, Dinar, Samko, Bojar, Olaf and others.
Genetically, the Tatra Chuvach can be characterised as a “leucistic” Mountain Dog with black muzzle and to a lesser part as “flavistic” dog with brown muzzle and paler eye. From the combination of the mentioned genetic types, of which the former is dominant, stems a certain difference in the shading of colour, of the pigmentation of the eyelids, eyes, muzzle, lips and membranes.
Through strict selection favouring the first type, the judges and breeders achieved the type required by the following standard and its stabilising by breeders.

The number of club members with breeding stock and kennels has recently been counted as towards 200. Living registered dogs, at present in the republic, number nearly 800.
The quality of our breeding of the Tatra Chuvach is confirmed by favourable assessment at international shows (Prague, Brno, Liberec, Bratislava, Leipzig and others) and this with strong foreign competition.

GENERAL APPEARANCE: The Tatra Chuvach’s breed characteristics conform in type with those of a mountain dog of firm constitution, impressive appearance and thick white coat. He has a strong bone, a lively temperament and is vigilant, fearless and alert. For centuries he has been accustomed to the harsh climate of the Slovakian mountains, especially the Tatra mountains. His format is well within the shape of a moderate rectangle, the body resting on strong rather high limbs. His vigilance and alertness helped to give him his name, as the Slovak word “Cuvat” means to hear.

BEHAVIOUR AND TEMPERAMENT: He is boundlessly faithful and courageous, always ready to fight off any intruder, be it even bears and wolves. In order to distinguish him from wild beasts in the night, he is, according to ancient tradition, only bred in white.

CRANIAL REGION:
Skull: Strong, longish in shape, broad between the ears. The broad forehead has a shallow furrow tapering away towards the rear. Superciliary ridges are in proportion and slanted sideways.
Top of head flat.
Neck clearly defined from strong, moderately protruding nape of neck. Top of head, in profile, slightly domed compared to bridge of nose.
Stop: Moderate

FACIAL REGION:
Nose: Black, especially in summer.
Muzzle: Straight in profile and about half length of had, fairly broad, tapering towards the front. Strong, of medium length, blunt.
Lips: Close fitting, corner of mouth closed. Mucous membranes black, forming a narrow, not overhanging frame to the mouth. Medium thickness. Palate black.
Jaws/Teeth: Strong, always with complete scissor bite.
Eyes: Dark brown, oval shape, set in horizontally. Eyelids black, close fitting. Membrane in the inside corner of the eye dark, making the eye expressive.
Ears: Set on high, mobile at set on. Of moderate length, hanging, lying close to head. Half way down, the ear has finer hair. When in repose, the rounded lower edge reaches to mouth level.

BODY:
Back: Straight. Of medium length and strong.
Loin: Moderately arched. Well attached to the sacrum, muscular, very strong and adequately long.
Rump: Strong, broad and slightly sloping.
Chest: Broad. Sternum bone reaching up to the height of shoulder joints.
Ribcage: Well sprung ribs. Sternum above half height at withers and reaching lower than elbows. The length of the ribcage exceeds half the body length; its breadth is a quarter of the height at withers.
Ribs: Arched, inclined towards rear and forming a clear transition to the flanks.
Belly: Belly and flanks appropriate, moderate tuck up.

TAIL: Set on low. Standing and in repose hanging low, reaching to hock joints. Shape straight like a cigar, not curled at tip. When moving carried curled over loin.

GAIT/MOVEMENT: Surprisingly light footed in spite of his powerful build, agile and quick, in every terrain and in all weathers; with preference for trot.

SKIN: Loose on body, otherwise close fitting. Skin pink; black pigmentation only round the eyes, the neck and muzzle where it merges with the black mucous membranes. Pads also black.

HAIR: With the exception on head and limbs, the hair form a dense coat without a parting on the back and without feathering on tail and buttocks. Males have a striking name. Hair is short and close on head and legs, slightly longer on rearside of legs. Short hair gradually merges from set-on of ears into the mane. Undercoat is completely covered by long hair in top coat. The latter is 5 to 15cm. Most wavy on mane, elsewhere moderately wavy, forming numerous waves across the back which merge into each other. Single waves, not joined, are undesired.
Required is a light dense coat.

Undercoat: hair fine and dense, in length up to half or two thirds of hair of top coat. The undercoat is shed during the summer, so the coat loses its density, but remains light throughout the year on account of the wavy topcoat which forms no parting on the back.

COLOUR: White. Yellowish shading at set on of ears permitted but not desired. Distinct yellow patches are not permitted.

SIZE AND WEIGHT:
MEASURMENTS:
Dogs Bitches
FAULTS: Any departure from the foregoing points should be considered a fault and the seriousness with which the fault should be regarded should be in exact proportion to its degree and its effect upon the health and welfare of the dog.
DISQUALIFYING FAULTS:

Any dog clearly showing physical or behavioural abnormalities shall be disqualified